Near You became available to download and stream as a single from Wednesday 23rd Aug 2017 (UK). eg. Spotify (although Spotify UK lists the date as 18th Aug?)

It was also released in the UK on limited edition 7″ vinyl, with A-side Sea Town on 15th September 2017 (via Loose Music)

Be sure to check out the version of Near You on the 2014 EP “Leuven Letters” as it sounds very different to the 2017 release.

Courtney talks about ‘Near You’ below:

Near You is about loving someone without expectations or ego. I wrote this song when I was 20 years old. At that time, I was still learning about that kind of love, and I suspect writing this song helped me understand that. Real adult love, is loving yourself enough to love someone without expectations. Near You explores themes of a flawed person who loves another flawed person, but doesn’t beg them to change. Since this song was written so long ago, but was still an integral part of my live sets, I really wanted to give it the proper attention it deserves, and finally record and release it to the world.

Near You appears as track 4 on the EP Leuven Letters and was also a single in Sept 2017. 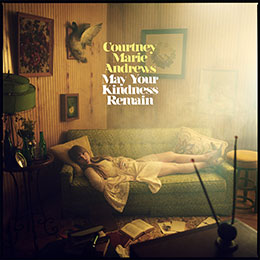 Courtney’s new album “May Your Kindness Remain” was released on 23rd March 2018.

Courtney has played a few UK shows so far this year. She’ll be back for Greenman Festival in August 2018, along with shows in Colchester, Nott’m, Norwich & Southampton.